This blog will cover the complete restoration of my 1961 Jaguar MK2. She began life in East London, South Africa in 1961. At that time she was a 2.4 MOD .The first clue to her journey to Ireland is a British V5 document in which the Registered Keeper is Owen Morton Motor Brokers of Wirral UK. This was the dealer who imported the car from SA. My wife's late uncle, Theo Ryan, then imported the car to Ireland in January 2003. Theo was very involved in the classic car scene and drove the car in Dublin until I bought it from him in November 2007.

The Jag weighs in at just under 1.5 tons. Having driven the 2.4 litre versions, their performance can best be described as uninspiring. Not the gangsters getaway car of choice that the 3.8 proved to be. At some stage in South Africa, the car acquired a 3.4 litre engine. This addressed the lack of power, but unfortunately whoever did the swap left the original 4.55:1 differential in place. So the car was very under-geared. It took me a while to find and fit a 3.77:1 rear axle which made her much more pleasant to drive. 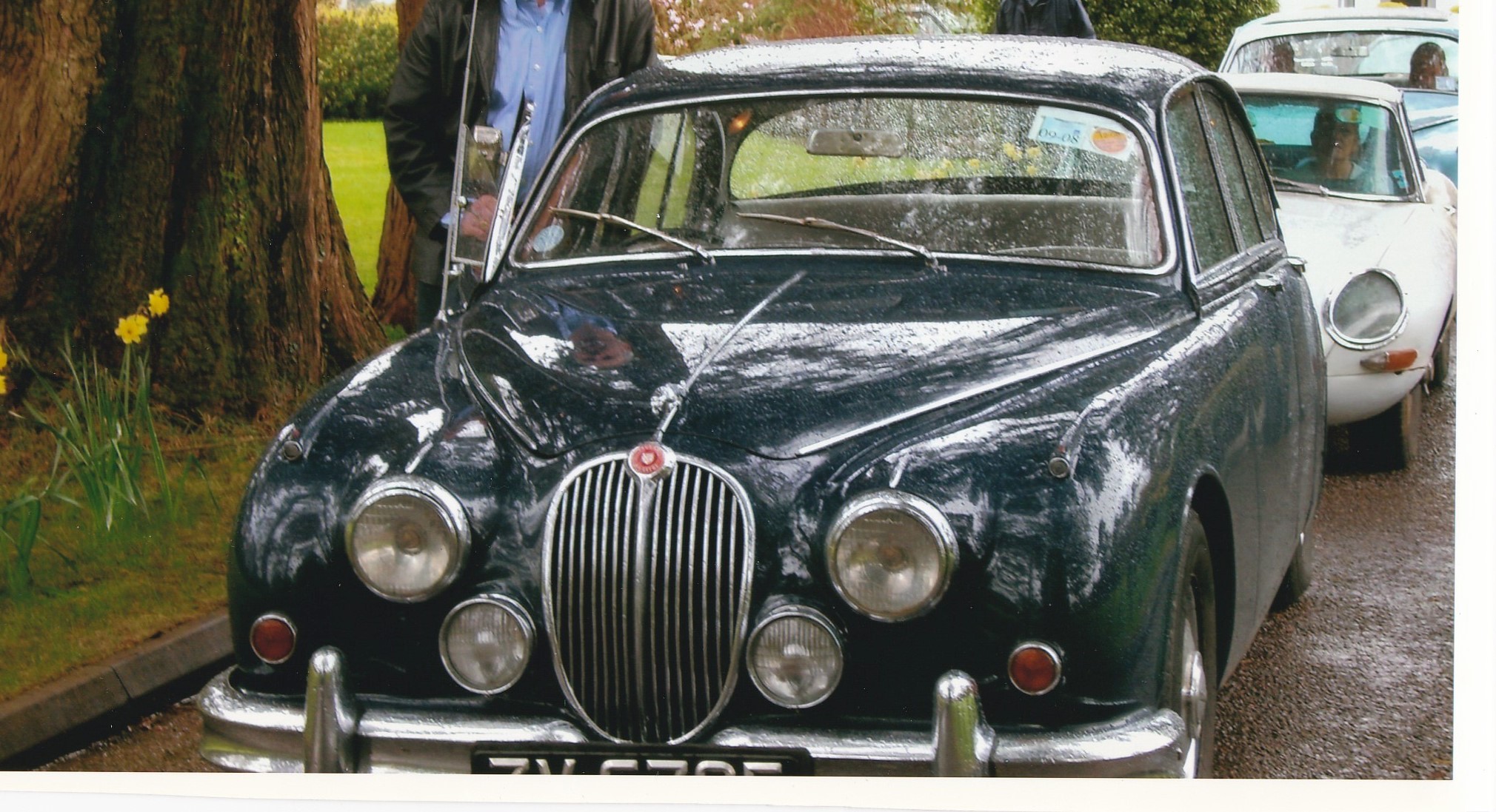 The car is relatively rust free thanks to her early life in the sunshine. She is darkish blue - Indigo I think - with light grey Ambla Upholstery. Jaguar didn't do vinyl upholstry in those days. If you couldn't fork out for the full leather treatment, the cheaper option was Ambla. Looks remarkably like vinyl to me. But obviously a better class of vinyl! She's fitted with standard disc wheels with chrome Rimbellishers and hub caps. During Theo's owenership of the car, he and his friend Jim Boland fitted an electric power steering kit from M&C Wilkinson. They upgraded the electrics from dynamo to alternator at the same time to give the extra oomph that the power steering pump needed.

I've driven the car since 2007 and kept her in as good a condition as I could. In spite of being mostly rust free, there are a few areas that need attention. She was resprayed at some point in her checkered career. Not the best paint job ever, with suspicious bubbles on top of the front wings and other places. In wet weather, there are serious water leaks into the passenger's foot-well. These are coming from the windscreen seals and rust is beginning to show in the pillars. Also some of the walnut trim has been destroyed by the water. I've identified the 3.4 engine as coming from a 1956 MK1. It runs OK if a bit smokey. But I have no idea of the engine's history or internal condition. A total strip down and examination with probably a re-bore, valve seats & seals, shell bearings etc is on the cards.

The Moss 4-speed gearbox is certainly of it's time but is not for the fainthearted. Synchro (of a sort) is only present on second, third and fourth and when you take off at traffic lights, it's a toss up whether you've selected first or reverse! No final decision yet, but it's very possible that she will acquire a ZF 4HP22 auto box from an XJ40.

That Ambla upholstery  is very worn and cracked and the seats themselves are uncomfortable. Especially on a long journey. I've got a complete set of XJ40 seats waiting to be installed. These will give better support, head restraints and electric adjustment of various bits. The front ones pretty much bolt straight in to a MK2 but the back ones have to be modified. Although the new seats are grey leather, they're a bit dark. So I'll be recolouring them to a lighter grey.

The wiring loom is mostly original 1961 with a bit of hacking about over the years. Most of the cables are cloth covered and those cars were fitted with only two fuses. It's really a fire waiting to happen. So I'll be redoing that. I'll need extra cabling to cover the seats, electric door locks etc and will install a new fuse box, probably under the dash.

So there you have it. Complete respray, change transmission, engine rebuild, new upholstery,  new wiring loom, renovate woodwork. Wire wheels would be nice. Oh, and maybe a Flux Capacitor :-) I'll try to update this blog every week to keep you abreast of developments. Please check back often and tell your friends to take a look. Any comments or suggestions would be warmly welcomed.